As the post of the 17th May I did the first check of nest boxes on the Bagnor Estate (40 boxes) and ringed a few but many were ready to fledge and were left un-ringed. On the 23rd May I received the ok to monitor the boxes on the BBOWT managed land. On the 24th I visited all the Peaked Hill boxes at Greenham Common (32 boxes). It being 7 days on from the Bagnor boxes more had fledge or were code RF (ready to fledge). The next day,  25th May, I checked the Snelsmore Car Park and Winterbourne Holt Boxes (65 boxes) and found a similar situation except for one box.

When I looked in this box I was faced with a warbler type bird on a cupped nest. It took me a moment or two to realise I was looking at a sitting female Pied Flycatcher. 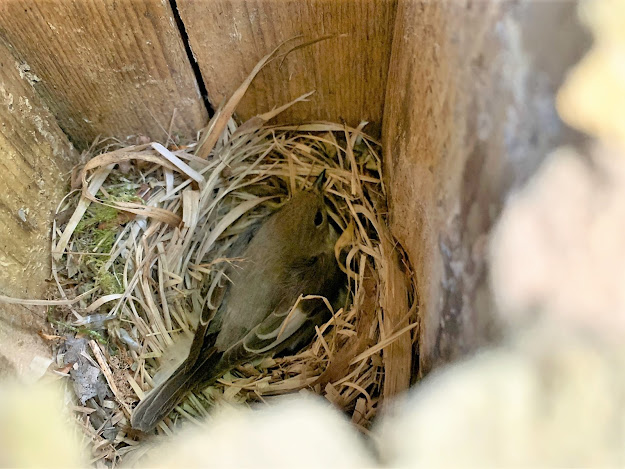 I quickly closed the box lid and retreated, forgetting to take a photo. I moved about 10metres from the box and began searching the trees trying to find the male who was alarming somewhere  amongst the leaves. It was a very windy day but you would think it would be easy to find a black and white bird but I couldn't find it. All the time I kept an eye on the box. After about 10 minutes I saw the female leave the box and disappear into the trees. Returning to the box I found six warm bright blue eggs. 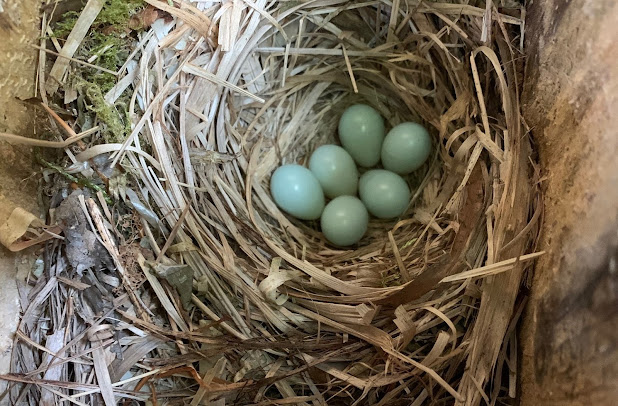 I researched Pied Flycatcher and found that the males don't always stay around and are sometimes polygamous. The females brood for about 30 minutes then leave the nest to feed for about 10minutes.The next morning, 25th May, after checking progress on some remaining broods in the Bagnor Estate boxes I returned and carefully lifted the lid and quickly photo'd the sitting female. I again searched for the male but there was no sign of him. Meanwhile the female  left the box to feed and I took a photo of the nest and eggs. I waited for another 10 minutes or so and saw her return.  On the 26th I visited and watched the box seeing the female leave and return a little later. I couldn't go on the 27th and next visited on the 28th waited for nearly 50 minutes but the was no sign of activity. Eventually I checked the box to find six cold eggs, the bird had deserted. I checked the following day and a couple of days after hoping to find warm eggs or  chicks but no luck. Quite disappointing really as I don't think I have ringed Pied Flycatcher and was looking forward to ringing the brood. The species in the UK is an upland species and the nearest breeding site I know of is the Forest of Dean. I think there was a nesting attempt in a West Woodhay box in the 1980s that got to chick  stage. These were killed by a very late frost apparently. There is always next year though.

I continued visiting the boxes of active nest until the the 1st Jun when he last pulli were ringed. I commenced final checking on the 16th June checking the last boxes on the Bagnor Estate on the 22nd. This was spread over a longer period than intended due to the weather. Below is a breakdown of the outcome of this years breeding.

Below is breakdown of the data. It shows that Great Tits seem to have done relatively well as have Nuthatch, Blue Tit however appear to have struggled. Usually there is an around five to three ration split  in favour of Blue Tits 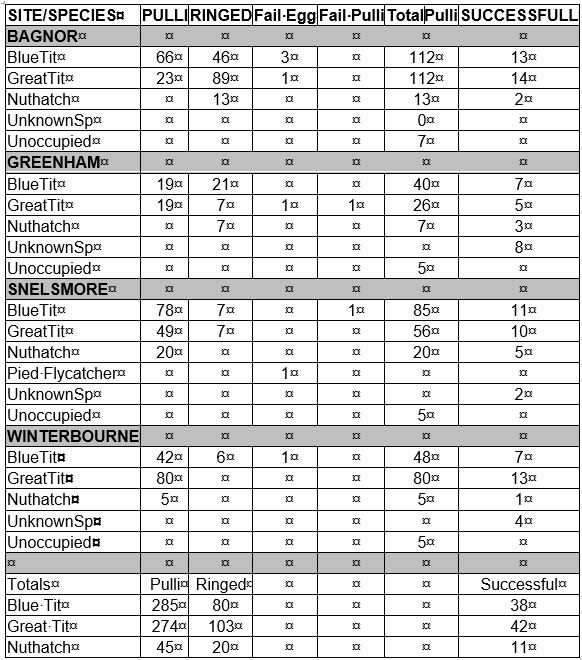